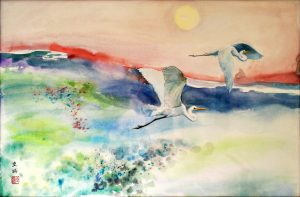 关关雎鸠，
在河之洲。
(“Guan guan,” calls the Jujiu,
That perched on the island in the river center. Translated by Yiou) It is the opening lines of a classic love poem in the Book of Poetry (11th-7th century BC) in ancient China.
Jujiu is ancient Chinese, and most modern readers translate it as either “osprey” or the hypernym “bird.” But I realized, after watching them, that great egrets are precisely what Jujiu in the poem refers to. Great egrets are graceful waders, so they are able to perch on the island in the river center; they are great lovers too, forming monogamous pairs; what amuses me most, egret calls most resemble Guan Guan!
(2016)